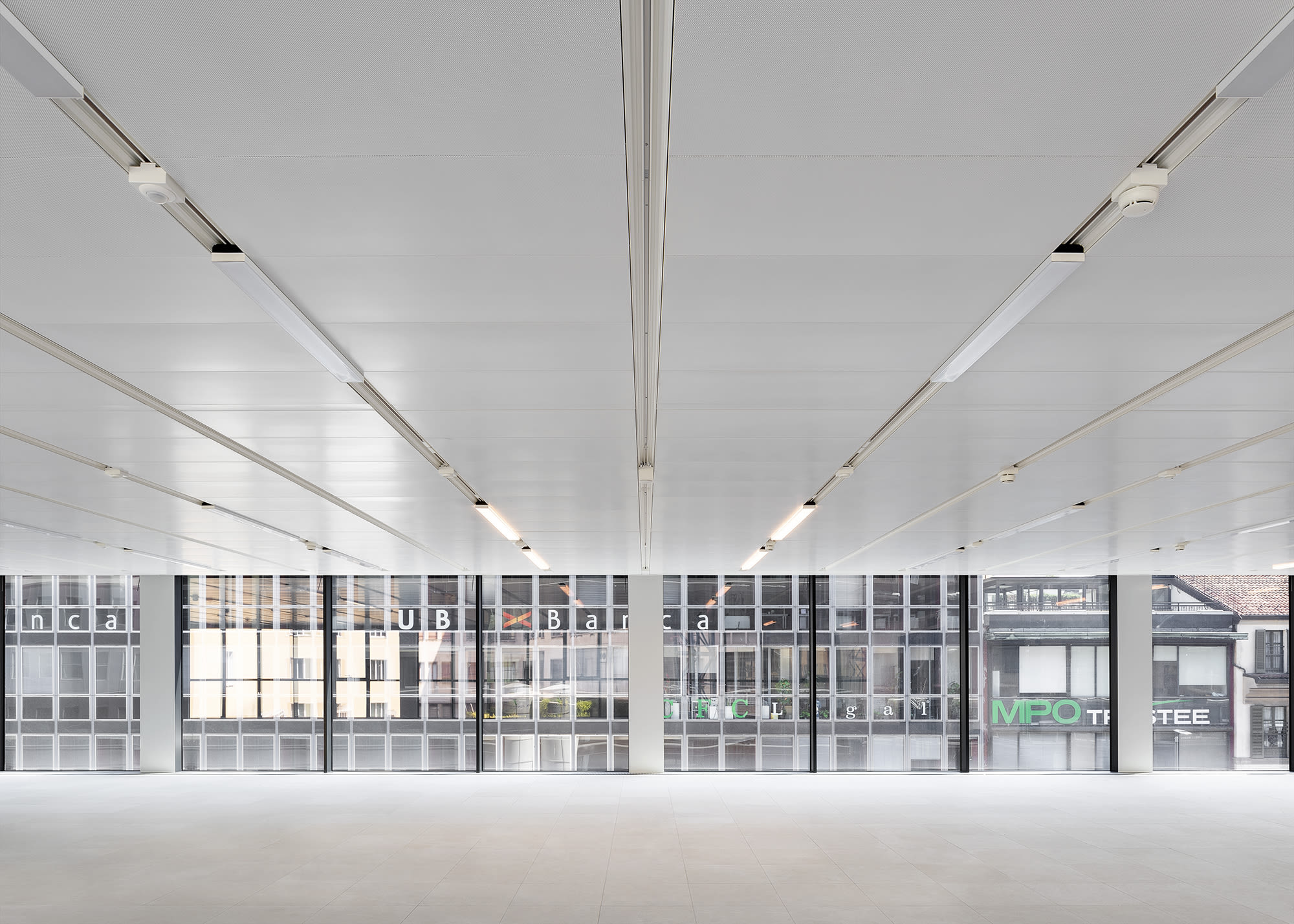 The renovation of San Babila Business Center, of Galleria San Carlo, and of Galleria Passerella 2, in the heart of Milan's historic center transforms a 21,000 sqm (GLA - Gross Leasable Area) block of buildings designed in the Fifties into a flexible and sustainable space. The project takes a careful approach to the conservation of the buildings’ original details, while elevating their character and elegantly integrating the architecture in the surrounding urban context.

By meeting the highest international building standards for environmental sustainability and personal well-being, the project by ACPV creates a flexible space able to adapt to its users’ needs, while preserving the original architectures as designed in the Fifties by renowned architects, Gio Ponti, Fornaroli and Soncini brothers.

Overlooking Corso Vittorio Emanuele II and Corso Europa, the two main wings of the building benefit from outstanding visibility. The offices, with cutting-edge design and abundant natural light, feature flexible, functional, and stylish spaces. The rooftop of the block on Corso Vittorio Emanuele hosts a 320 sqm terrace with a stunning view over the Duomo cathedral and the city's skyline.

“Our design responds to a dual purpose: the creation of a particular design language for a single yet extensive office complex, while undertaking an urban regeneration intervention right in the heart of the city’s busiest, best-known cultural, commercial and tourist destination,” says Antonio Citterio, co-founder of ACPV firm, “We redesigned the buildings’ façades, entrances and lobbies – opening them to the city.”

By replacing the original windows’ frames with new black fixtures, the building’s façade overlooking Corso Europa shows a lighter and modern look, while highlighting the supporting structure. The façade of Galleria Passerella 2 now features a continuous glass surface, after the removal of the old façade made of prefabricated concrete.

ACPV also intervened by opening the buildings to the city. Lobbies are wider and more visible from the outside, with the characteristic spiral staircase of Galleria San Carlo that can now be seen from the street – in perfect harmony with the urban landscape. “We wanted to infuse new life to the buildings, enhancing the original architecture of renowned architects such as Gio Ponti”, says Marco Brambilla, partner and project director at ACPV. “We had the marbles and original details renewed and we designed the new addictions with new lighting items in order to highlight the historical threshold difference for some elements of the shared spaces – such as the elevators – to make them more accessible and prominent.”

The redesign of the 21,000 GLA block of buildings also involved connecting the layout of Galleria San Carlo and Galleria Passerella 2, creating a continuous space able to allocate up to six tenants each floors.

“The new space design offers a glimpse of the workspace of the future,” says Patricia Viel, co-founder of ACPV firm. “The space of the offices can be easily changed and adapted to their users’ needs – a feature that comes quite handy, considering how work paradigms are changing because of the covid-19 emergency.”

ACPV designed a false ceiling that allows lights and partition walls to be easily moved, integrated or eliminated, so as to create a reconfigurable space able to quickly switch from open to closed workspaces.

The project by ACPV integrates the highest sustainability and personal well-being standards, which led to energy class A building certification besides the prestigious LEED Gold and Well certifications.

The building was sold by Goldman Sachs to DeA Capital Real Estate SGR S.p.A. for more than € 280 million, marking one of the most important Real Estate transactions of the year 2019 and the biggest single asset deal in terms of size.

The project is part of a wider renovation intervention by ACPV in the San Babila area – including a residential tower and a mixed-use building in Corso Vittorio Emanuele, both designed by BBPR architecture practice in the late Seventies - and continues ACPV's long line of experiences in the design of offices - recent works include NOVE, an office building in Munich (Germany), and Nexxt -Fastweb new HQ in Milan.

We use third party cookies to produce statistics about the usage of this website. To find out more or to refuse consent, take a look at our Cookies Policy. By closing this banner, by scrolling this page or by clicking on any of its elements you consent to the use of cookies.
Please rotate your device